It’s been really interesting to see lots of thought over the last couple of days on spreading the word about UKGovCamp, and the unconference idea in general.

Is there a danger, some attendees have asked, that we’re only really speaking to the converted at these things, however far the virtual word spreads via blogs, Flickr tags and the like.

I was mulling this over on the train home on Saturday night and comparing UKGovCamp with another event I’d attended just the day before, an LG Communications’ seminar in Nottingham about social media.

The line-up of speakers was stellar, including Will Perrin, Dan Slee, Michelle Ide-Smith and Ally Hook, and it was a really positive day. There were lots of local government people, all at different stages on the digital communications journey, all wanting to learn how to do things better.

There wasn’t an avalanche of tweets from this event, unlike UKGovCamp, mainly because the majority of local government comms people there are taking their first steps into the world of digital.

But they were at the event. They ‘get’ the idea of social media and digital comms. And, whatever barriers they face back at the office, they really want to do something about it. They’re exactly the kind of people who should be at unconferences.

So how to get them there?

At UKGovCamp itself, and over the last couple of days, some encouraging things have happened which may help.

On Monday, in a brilliant move, plans were swiftly put in place for a BigLocalGovCamp in Birmingham, in June. Even more brilliant was the idea that attendees should bring along a colleague, someone who would really benefit from the experience. It was a fantastic idea from Carl Haggerty. 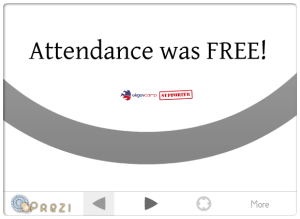 Also on Monday, Liz Azyan produced a brilliant Prezi presentation specifically aimed at people who weren’t at UKGovCamp. It summarises what the event was all about, the major topics that were discussed and what some of the attendees thought about it.

It’s top notch and I’ve sent a link to all my comms colleagues at my council. You should do the same.

At UKGovCamp on Saturday, meanwhile, the brilliant Andy Mabbett from Birmingham announced that a Birmingham Tea Camp would soon be up and running, very much along the lines of a regular event in London.

The idea is simple. People meet up in a cafe, drink tea and talk about epic stuff. Ace. I’ll definitely be going along – and encouraging my colleagues to do the same.

It’s probably indicative of the confidence of the unconference community, and the huge success of UKGovCamp 2011, that much of the focus of the early post-event scheming and wheezing is about getting more people involved. To convert the unconverted.

That’s brilliant, that is.